An alternative theory derives Alfrick from elf-reich fitting better with its claim to be the most haunted place around Worcester.

Early 20th century references record that ‘Alfrick is on the Bromyard road, containing Alfrick Court and several half timbered cottages. Alfrick Pound is a hamlet to the south.

The southern part of Alfrick consists chiefly of woodland, Old Storridge Common and a couple of mills on Leigh Brook. There is a corn mill to the East of Alfrick Pound and the name Papermill Coppice suggests the exsistance of a further mill’

The records continue to state, ‘The parish, including Suckley has an area of 5,183 acres of which Alfrick is 1,648 and Lulsley 843.

Lulsley is in the north of the parish containing Lulsley Court, the southern part of the house, that rests on a stone base , is of the 16th century, the north wing being added in the 17th century. Coal Place is a 17th century T shaped house of two stories and an attic built of timber with brick filling.

At the north-western angle of Lulsley is Rosebury Rock a remarkable cliff, densely wooded at the foot of which flows the Teme’.

Today, while having their own identity, Alfrick and Lulsley are as one with one Parish Council, one church a shop and post office and a pub, the Fox and Hounds. In addition, there is the village hall hosting weekly, monthly and annual events for the benefit of the community. The annual Alfrick & Lulsley Horticultural Show & Fete on the first Saturday in September attracts a crowd in excess of 3000 and raises funds for local organisations, schools and charities. 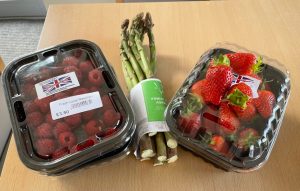